Skip to content
Previous Next
The Etudes of Friedrich Burgmüller 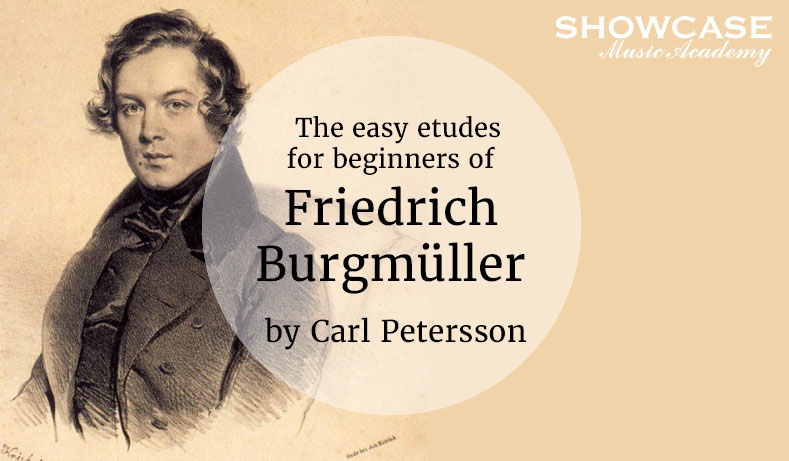 The easy etudes for beginners of Friedrich Burgmüller

The Canadian RCM system for piano is very well-rounded and introduces young pianists to a wide range of wonderful composers and fantastic piano pieces. Advanced students and beginners alike have a wide array of pieces to choose from for their exams.

Alas, no system is perfect and I do believe there are some items lacking in the syllabus. I would go out on a limb to say accurate etudes are not present enough.

When we hear the words “technical piano practice” we tend to think about Charles-Louis Hanon’s boring exercises which, although good, are not exactly what a child would work on with joy. The most prolific composer of etudes for the piano is without any doubt Carl Czerny who was one of Ludwig van Beethoven’s students and the Nestor of classical piano pedagogy. Czerny wrote hundreds of etudes for children and adults alike and this is where I would like to add some focus. Yes, many – arguably most – of Czerny etudes are not great music but this is beside the point playing them. The purpose of etudes is not to explore deep musical meanings but to develop the student’s mechanical know-how of fingers; improving dexterity, strength, sensitivity and precision throughout a piece which is based on a certain technique the student is studying. Etude means study. Lang Lang put it very precisely that “sometimes you need to suffer a little bit”. This is not to say that all etudes are boring and they certainly help. I encourage all young pianists to study Op. 139, working on each Etude for two weeks and then move on to the next one.

The most famous etudes which pianists and listeners know of are the ones written by Fryderyk Chopin, Franz Liszt and Sergei Rachmaninov. However, all of those are advanced and very demanding. They are also unreachable if you don’t have the right preparation.

Another very good composer for etudes aimed at children and other beginners is Friedrich Burgmüller. Though concert goers in Canada may not know his name many seasoned pianists certainly will. Burgmüller was a renowned composer and teacher of the 19th century. Although German, Friedrich spent most of his professional life in Paris, France. His music is indicative not only through his style but of the demand from a large market of middle-class music making in the home. No bourgeois family could consider their children well-rounded without the obligatory piano lessons. Manufacturers responded with a multitude of instruments and composers such as Friedrich Burgmüller supplied the sheet music that filled the piano bench. This is teaching material that is still used today and with his gift for creating likeable thematic material. There is no surprise why they are still so popular, especially in China and Japan where every serious piano student has encountered a couple of his etudes to develop not only their technique, but also musicality 一 which is why I believe these etudes are wonderful, not only because each one focuses on a technical problem, but they are fashioned in a bel canto tradition.

The first book starts with a gentle  “Pastoral”, continues with his, perhaps most famous piece, “Arabesque” and later also includes a virtuoso “Tarantella” that without any doubt will tax the young aspiring pianist.

The second book includes the lovely “Pearls”, a joyful “Awaking in the Woods” and the waltz “Sylphs” which depicts air spirits.

Only after Burgmuller Czerny’s Op. 299 and 740 一 then comes a natural continuation before starting studying the etudes by Chopin or Liszt.