Skip to content
Previous Next
Performance Anxiety & How To Manage It 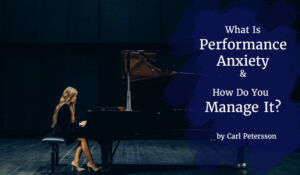 What Is Performance Anxiety & How Do You Manage It?

What is performance anxiety?

Stage fright has many faces and every musician has faced it.

Pavarotti didn’t wish it upon his worst enemy. Birgit Nilsson wished for a small accident on the premiere night so she didn’t have to be on stage. Leopold Godowsky, who was famed for his pianistic abilities, was often found backstage white as a sheet, claiming he don’t remember a single note, and Sviatoslav Richter, one of the most celebrated pianists of the 20th century, needed a plastic lobster to be able to perform.

To some musicians, the stress they feel before performing is positive and will elevate the performance, whereas to others it can turn the concert into a spectacular failure. 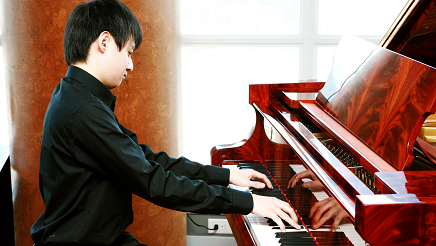 Why is this so?

When you are on stage playing, do you play for the audience or in front of the audience? This simple question will put the finger on many things which are problematic in the world of classical music.

Classical musicians want to micromanage every little detail on stage and try to play as well as they do in the practice room. At the same time, we are supposed to balance this with what our teachers are telling us to do and what the composer wishes the piece to be. All of the above-mentioned reasons will block us from letting go and expressing ourselves. This can – and often will – lead to stress and stage fright.

The problem with this is that the musical performance often will suffer. There will not be much joy in a performance where we are focused on the most minuscule details. It is very hard to relax when you are on stage, about to perform, and you want to remember every slur, every staccato and every comment by your teacher. In the best case it will be a performance with little personality and in the worst case it will be a disaster for the musician.

When we want to pay attention to every detail and do everything perfectly, we do so because we fear we will be judged.

This is particularly hard because the instrument is supposed to be an extension of the body of sorts. It is the vessel we use to express our feelings thus it becomes something very personal. Criticism of the performance will be criticism of the musician’s taste, ways of expression and musical knowledge. We want to do it “perfect” and classical musicians are often afraid of letting go because of this fear.

Because when we feel this looming judgement above us we don’t see the audience or the adjudicator as a person. Rather the primitive part of the brain puts us in the cave man stage. We stress, become nervous which makes our pulse raise, heart beating faster, hands getting cold and sweat. This puts our body in a state which is uncomfortable – we don’t want to be there, our breathing increases. Instead of people, our brain sees lions and crocodiles that want to shred us to pieces. We want to run away.

As the pulse increases, we experience time in a different way which also makes us play faster. If we didn’t practice well enough, this performance will end in disaster. Or at least, our brain tells us this.

My suggestion for studying any piece is of course to memorize everything the composer wishes. Studying a piece as a classical musician requires us to know what is in the score. When this work is done I strongly encourage you to leave the piece. Let the piece rest. Work on it again in some months, let it grow “with” you. Next time you study the piece you try to listen to harmonies, see how you can phrase it, see how you can work with the tempos, articulation and expression. Don’t take everything too seriously but work with the basic guidelines of the piece. Let the piece rest again for some time. Next time you take the piece up you will try to forget about everything and create music, present your way of this piece. The piece has become a part of you and you are free to “improvise” with the music. You can now let go.