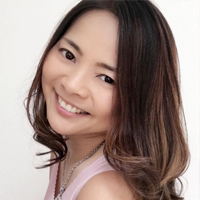 A graduate of the Royal Academy of Music in London, England, Miya Otake is an active harpist contributing her talent in both performing and teaching.

At age of seven, she began to study harp with Taeko Okajima. After immigrating to Canada, she continued her musical studies at the Vancouver Academy of Music and the Victoria Conservatory of Music with scholarships. She has always achieved high scores for her musical exams and won many awards including the Kiwanis and other musical competitions. She has appeared in many recitals and numerous TV programs studying under Taka Kling who is a former professor at the University of Victoria.

After completing her post-graduate studies at the Royal Academy of Music with Daphne Boden, Skaila Kanga, and Marisa Robles in London, England, she pursued further studies in Nice, France with Madame Fontan-Binoche.

Miya has performed in Canada, USA, Brazil, Europe, and Japan. Her notable performances include the Harp Duet with her sister, Kaori Otake at the prestigious Carnegie Hall in New York.

She is the founder of the award winning Westcoast Harp Ensemble and currently, she is the principal harp instructor at both Langley Community Music School and the Vancouver Academy of Music.

Her students have received many Awards from the Kiwanis International Music Festivals and also many Gold and Silver Awards from the Royal Conservatory of Music, receiving the highest score for their Examinations.

Miya has been awarded the Teachers Certificate of Recognition from the Royal Conservatory of Music for her student’s highest achievements.