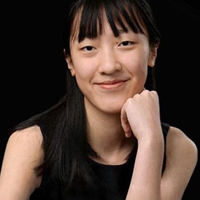 Maggie Lu began her musical education at five years of age. At the young age of twelve, she was awarded her diploma in Piano Performance and is an Associate of the Royal Conservatory of Music (ARCT). Her first lessons in piano have inspired her to perform to this day, winning First Place in competitions such as the Richmond and Vancouver Kiwanis music festivals throughout her childhood. She has concert experience in venues such as the Bell Performing Arts Centre, Roy Barnett Recital Hall, and the Chan Centre, in addition to performances with folk pop band known as The Wilds. She holds several First Class Honours and Distinctions for her strong background in music theory and history. Currently, she is pursuing her degree in Piano Performance at the University of British Columbia, School of Music.