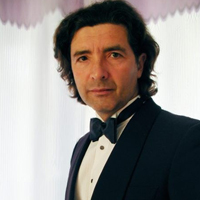 Kirill Bolshakov was born in Moscow, the capital of Russia, to a musical and artistic family.

In the 1970s, Bolshakov attended the P. Tchaikovsky Moscow State Conservatory at the Central Music School. In 1978-1983, at the Faculty of Music in the Moscow State Institute of Pedagogy, Mr Bolshakov was developing his skills as a concert pianist, conductor, composer and a piano teacher. His pianistic heritage is deeply rooted in the great Russian tradition of piano performance and can be traced back to starting with his professors A. Youdin and A. Artobolevskaya all the way through to Maria Youdina, Leonid Nikolayev, Felix Blumenfeld, Anton Rubinstein , F. Liszt and F. Chopin. Kirill Bolshakov later joined the Faculty of Music staff in a capacity of a concert pianist and assistant choirmaster. In the Soviet Union, Kirill Bolshakov performed numerous solo concerts in the halls of the Moscow Conservatory and Philharmonic, at the Radio and Television, and in the cities across the Russian Federation. After his family’s immigration to Europe in 1990, Mr Bolshakov worked as a piano instructor and accompanist in the Franz Liszt Academy in Budapest and Gyor in Hungary, as well as in the Musikverein in Vienna, Austria. He also led the choir and performed as an organist in the Hungarian Methodist Church.

During his time in Canada, Kirill Bolshakov has been continuously concentrating on the achievements in the fields of his main interests – music composition and piano performance. He had been engaged widely in solo and ensemble concerts across British Columbia and the United States. He is also collaborating as a pianist and a music consultant with the American and Canadian movie industry. Currently Bolshakov is engaged in an ensemble performance with cellist Bo Peng, and as well as a member of the Vancouver Concert Trio. Along with his performing engagements and teaching, Mr Bolshakov dedicates most of his time to music composition. He is currently working on a few piano opuses, including a piano sonata and a cycle of pieces “10 Etudes Cosmiques,” in which he continues to explore, evolve, and manifest his stylistic ideas. Amongst Kirill’s long-term projects is the opera “The Wave-Running Girl” which is based on the text of the famous Russian author Alexander Green. Bolshakov is also planning to compose an opera on the subject of a modern-day story, which takes its narrative in one of the First Nations tribes of the Canadian West Coast. Mr Bolshakov is currently working on the finalization of his Cello Concerto’s orchestration, with the perspective of its performance in Canada in the near future.

Established by Dr. Bolshakov in 2013, the “Kirill Bolshakov Artists Agency” aims to provide classical Canadian and International artists with concert-performance opportunities both on the American continent and around the world.