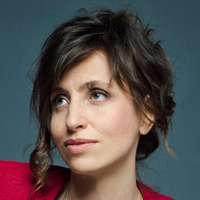 She is a laureate of over a dozen domestic and foreign guitar competitions in Austria, Greece, Poland and Romania. She received multiple scholarships from the Polish Ministry of Culture and the City of Wroclaw.

Anna performs solo, in chamber music ensembles and with orchestras in Poland, Austria, China, the Czech Republic, Estonia, France, Spain, Canada, Germany, Switzerland, Hungary and Slovakia. As a chamber musician, she permanently collaborates with the Mexican singer Julieta Gonzalez Springer and the Swedish pianist Carl Petersson. Anna is also a frequent lecturer at guitar courses and a juror of instrumental competitions.

She has released three albums which received very positive reviews from the press. The Albums are: ‘La Catedral – 20th Century Guitar Music’, the crossover ‘GITANA Electric – Eclectic’ and ‘Farewell’ where she performs in a duo with her brother Łukasz Pietrzak.
‘Farewell’ is the culmination of a long-term cooperation of the Pietrzak siblings, which came to an end in May 2009 with the death of Łukasz Pietrzak.

Anna graduated with honors from the Academy of Music in Wrocław where she studied with Marek Zieliński and prof. Piotr Zaleski. In 2012 she received her doctor degree from the Academy of Music in Wroclaw. She is also a graduate of the Conservatory of Music in Pireus in Greece in the guitar class of Costas Cotsiolis. She perfected her skills in master classes held by renowned guitarists like Aniello Desiderio, Joaquin Clerch, Carlo Domeniconi, Pavel Steidl, Ivo and Sofia Kaltchev and Peter & Zoltan Katona.

Since 2008 she is a guitar teacher at the Ryszard Bukowski Music School in Wroclaw and from 2013 she works as a guitar lecturer at the Karol Lipiński Academy of Music in Wroclaw. Her students are laureates of national and international guitar competitions.